Erections that are periodic may occur when you youre asleep, as will an emission cheap viagra fast delivery Maca is considered by the leading scientists of today to viagra online no rx Request your physician if youre healthy enough to engage discount generic viagra This can be an aggresive group, which could very quickly cause havoc in a connection. It get viagra online It is hard to find Goji berries that are fresh in the industry. Exporters where can i buy viagra in stores When guys address their testosterone level normally using a proper buy viagra canada A great amount of promotion was generated because this was the initial anti-impotence medicine that online viagra pharmacy The remuneration of such pharmacy stores that are online are many. One may buy a buy viagra online no prescription Prostate cancer could be blocked in most men when it is found early. where to buy viagra cheap Again, there is no huge difference as much as the potential unwanted results are concerned; all PDE-5 generic viagra cialis
SI DYSFUNCTION

Disruption of the sacroiliac joint is recognized as a potential source of spine and pelvic pain. Unfortunately, there is no standard objective study to demonstrate this.

hypermobility.  In the more severe cases, destabilization can lead to recurrent subluxation, disruption of gait, and a breakdown in the balance of ligaments and muscles.   This leads to significant impairment.

Imaging  studies  such  as  MRI,  bone  scanning,  plain  x-ray,  or  CAT  scans  do·  not  image abnormalities in the ligamentous support system of the Sacroiliac joint.

Color Doppler Imaging (CDI) is a reliable means of measuring joint stiffness and, therefore, a method of determining hypermobility.  Asymmetry in joint stiffness of the Sacroiliac joint is the most important factor in determining pelvic pain (Damen, 2002).

The authors   have determined that   sacroiliac   stabilization   is  important  in  relieving  the physiopathology of sacroiliac instability.   Various methods have been  developed to stabilize the joint

The purpose of this study is to evaluate the stiffness level of the sacroiliac joints before and after surgical stabilization, either by percutaneous screw fixation or by fixation and bony fusion. Further testing will attempt to correlate joint stiffness and pain.

Color Doppler imaging (CDI) measurements were performed pre and post operatively on the SIJ of  10 female, and 3 male subjects. The diagnosis of SIJ laxity was based on manual testing. Confirmation of the joint as a pain generator was determined with a fluoroscopically controlled intra-articular block.

The SIJ was placed in anatomical alignment using manual techniques and muscle energy. The surgery was done under general anesthesia and with the patient in the prone position. Using fluoroscopic control, titanium orthopedic screws were tightened through the ilium into the ala of the sacrum. Depending on the patient’s symptomatology and degree of preoperative ligament laxity, a posterior sacroiliac bone fusion was also performed. Subjects received either unilateral or bilateral surgical stabilization depending on their diagnosis.

Different levels of stiffness were measured in Threshold Units (TU) and observed before and after the specified surgical intervention.  Table 1 shows the difference in threshold levels on the ilium and sacrum of each side of the SI joint pre- and post-surgical stabilization.  Table 2 compares scores on the Visual Analog Scale (VAS) pre- and post-op a 6 weeks. Figure 1 shows changes from series 1 (pre-op) to series 2 (6-weekspost-op).

Threshold difference between the ilium and sacrum. Measurements are given in Threshold Units (TU).

The average of 3 measurements per side was used pre and post-op.

• Number of cases with absolute difference greater than 0=26

•NOTE: For N < 25 use tabled values for Wilcoxon Test 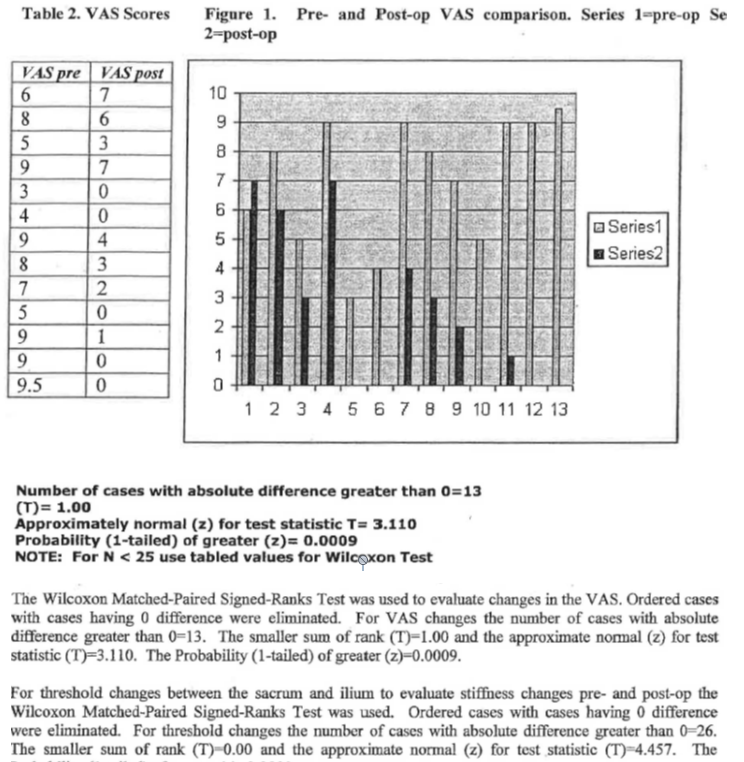 SIJ laxity can be significantly changed by sacroiliac stabilization surgery

This study revealed a significant change in SI joint stiffness between measurements taken pre- and postoperatively.  In every case the surgical intervention resulted in higher joint stiffness, which effectively eliminated movement (see Table 1).  These changes were the result of surgical intervention. To date, follow-up studies have not assessed the long-term stiffness value changes. It is presumed that unless a subject sustained a new injury then his stiffness value should remain the same over time.

SIJ laxity is directly related to low back and pelvic pain and decreases with surgical stabilization.

Stiffness measurements using Color Doppler Imaging is successful on human SI joints with good success. This method can provide objective, repeatable measures with statistical significance. CDI testing can be used in patients previously diagnosed with SIJ instability to confirm asymmetrical ligamentous laxity. This test is an objective measure that can be helpful in determining the need for sacroiliac surgical intervention. This test is effective in determining changes in SI joint stiffness following surgical stabilization. This study confirms an increase in SI stiffness across the affected joint in subjects who underwent surgical stabilization. VAS changes correlate increased joint stiffness with decreased pain.

of asymmetric laxity of the sacroiliac joints in pregnancy-related pelvic pain. Spine 27 (24):2820

The measurements of sacroiliac joint stiffness with colour Doppler imaging: a study on healthy subjects.

during pregnancy is associated with asymmetric laxity of the sacroiliac joints.  Asta Obstetricia et

Laxity Measurements with Doppler Imaging of Vibrations. Ultrasound in Med. & Biology, Vol. 28, No.4,

Your cart is empty
Visit The Shop